On 5th June 2021, the G71 reached a historic deal to change the international tax framework whereby it is expected that multinational companies will end up paying more tax. The Organisation for Economic Cooperation and Development (OECD) has been working hard to get consensus on the reform of the international tax framework. In 2020, the OECD re[1]leased its reports on the blueprints of the two-pillar approach to address the tax challenges arising from digitalisation of the economy. The G7 agreed to move forward with both pillars. On one side they agreed on a global minimum tax rate of 15% (Pillar 2) and on the other side it was also agreed that companies will end up paying more tax in the countries where they are selling their products (Pillar 1). The objective of the global minimum tax support[1]ed by the G7 countries, and in particular the US government, is to avoid the shifting of profits by multinational companies and deny tax deductions on related-party payments to foreign corporations residing in a jurisdiction that has not implemented the minimum tax. On the other hand, the taxation of companies in countries where they derive sales revenue will impact the US TECH giants like Facebook, Amazon, Apple, Microsoft and Google.

WHAT DOES THIS IMPLY FOR MAURITIUS?

Generally, the corporate tax rate is reflective of a country’s level of government spending and budgetary position. After independence, Mauritius was a high tax country where tax rate was as high as 75% in the 1970’s. The period of high tax coincided with a period of economic slump, two devaluation of the rupees and high unemployment. Mauritius embarked on a gradual reform of its taxation system as from 1982 which culminated in the enactment of a new Income Tax Act in 1995 and the Value Added Tax in 1998. Tax holidays and tax incentives were granted to specific sectors. In 2007, in a view to the Mauritius tax system, a flat rate of tax of 15% was introduced in Mauritius. Al[1]though specific levies are applicable to companies in certain sectors and to high income earning individuals, Mauritius has a relatively attractive corporate tax rate. The country has long maintained a strict fiscal discipline, allowing it to maintain a competitive 2 corporate tax rate (15%) and use tax incentives as a tool to attract foreign direct investment (FDI) and this with the aim of creating jobs.

It is expected that many OECD and G-20 countries would support the global minimum tax proposal to prevent a race to the bottom particularly in view of the effect of the Covid 19 pandemic on their finance. Will this global minimum tax inevitably limit Mauritius’ choices in setting its own tax policies and indirectly undermine its sovereign rights? As a small insular island, will Mauritius have to adapt and adjust its tax policies to fit into the new tax world? The nominal tax rate in Mauritius is already 15%. However, there are various incentives available where companies in some specific sectors end up paying an effective rate of less than 15%. To date, Mauritius has harmonised its tax system and all its regimes have been veted and are whitelisted by the OECD and the EU. Mauritius has committed to the BEPS actions on combatting tax evasion and the natural next step will be to implement the GMT. It is understood that the GMT refers to an effective tax rate and profits taxed at a lower rate may be taxed elsewhere, i.e., where the sale is actually being made. Not all companies operating in Mauritius will feel the burden of the GMT as Mauritius will need to push for carve out for companies with appropriate economic substance, in order to avoid that companies end up paying tax in two jurisdictions (if their effective tax rate in Mauritius is less than 15%). The additional tax revenue can be used make Mauritius more attractive to potential investors. Mauritius has laid out the framework to be a robust financial centre and the government may consider additional measures such as the subsidising of capital investment, reduction of VAT rate and the reduction or abolition of Personal Income Tax to continue to stay competitive. The government can use the additional tax revenue towards upskilling the workforce such as enabling students to pursue an additional degree in some specific fields or subsiding professionals in acquiring qualifications like Chartered Financial Analyst.

WHAT WE CAN FORESEE?

Without doubt, some countries which have relatively low or no tax, such as Ireland and UAE (Dubai) are more likely to feel the effect of the Global Minimum Tax as Ireland has a nominal tax rate less than 15% (12.5%) while Dubai has a NIL rate of corporate tax on most income. Moreover, multinationals operating in tax havens are likely to witness the burden of such opaque structures. The unprecedented tax reform will transform the game play for Mauritius, where tax incentives have been instrumental to attract investment. Mauritius can still rely on its strong legal framework, its ideal geographical location, infrastructure, labour market and financial and legal systems to continue to be the gateway to Africa and Asia. 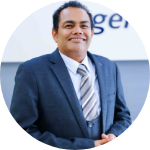 The Future of Accounting with Digital Transformation