With heads of states and finance ministers unveiling their recovery plans across continents, our colleague, Antish Bissessur – Head of Investment Advisory, shares his thoughts on a few key elements.

“A good plan violently executed right now is better than a perfect plan executed next week”, famously said General Patton during World War II. This analogy to war strategies is well suited in today’s testing times, whereby our agility to respond to the crisis is being tested, more frequently than what we would have anticipated. Last month, the Parliament of Mauritius voted the Finance Bill 2020 – what was supposed to be a plethora of agility-fuelled measures to help the country weather the economic storm brought by COVID-19 and catch a recovery wave at soonest. Similarly, African states have also come up with their respective responses to the crisis, and the breadth and depth of those differ according to the policy makers’ comprehension of the challenges.

While the purpose of this insight is not to appraise any specific country’s policies, selected key points have been brought forward. First, a quick recap from Economics 101 to remember J.M Keynes’ aggregate output equation (Y=C+I+G+NX) will help us understand that in the current crisis, as a general rule, “C” has been severely impacted and will continue to be, at least in the medium term, with unemployment expected to be in double digit . “I” will also understandably be subdued, with investor sentiment on the bearish side. Clearly, “NX” will be deeper in the negative territory with exports figures falling further away from the imports figures (Note: the current account balance of the sub-Saharan countries is at -4.9% and North Africa at -8.2%, as compared to 2.7% in the European Union and 4.0% for other advanced economies[1]). Hence, the only component that could save the day is “G” – as the designated safe keeper of the economic health of a country. 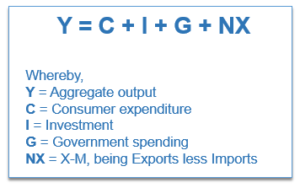 In that spirit, Governments across the African continent and the world are coming up with several measures to boost Government spending and alleviate the downward pressure on economic growth. The Mauritian Government has chosen to boost spending on infrastructural projects and included several measures and incentives for the development of sectors such as agriculture and pharmaceutics – both at the forefront of the COVID-19 crisis. In an effort to further open the economy and attract talents, the Government of Mauritius has proposed changes to the Immigration Act, with changes notably in occupation permits and rights of those entitled to them, for example, extended validity from 3 to 10 years. The amendments made to the Non-Citizen (Property Restriction) Act will also allow the right to acquire land, in addition to property, in smart cities to non-citizen residents. These incentives certainly make Mauritius a destination of choice for relocation, be it from a personal or corporate perspective. The amendments to the Banking Act to recognise Digital Banking business is also in the right direction – as the country aspires to accelerate its digitalisation.

Elsewhere on the continent, the crisis has taken a more considerable toll on economies that are characterised by over-reliance on specific sectors/products. We have witnessed, more than once, the impact of a collapse in oil prices on the current accounts of countries like Nigeria, Angola or Libya. Côte d’Ivoire, for instance, remains largely reliant on its cocoa sector. While competitive advantages should not be neglected, African Governments ought to promote economic diversification as this has proved to be a key driver in creating additional economic growth – especially for lower-income countries, i.e. most of Africa. From a research conducted by the IMF over the 1962-2010 period, African countries fared poorly as compared to peers from other continents. For example, the sub-Saharan region had an export diversification index of 4.15 in 2010 as opposed to 1.92 for the European Union and 2.48 for other advanced economies, in the same time period. While we expect that progress has been made in the last decade, there is still a long way to catch up with the more advanced economies. To take the example of Mauritius, the economy has greatly benefitted from shifting its singular exposure to the sugar industry in the 1970s/80s towards the development of new pillars of growth – including the financial services sector that has today, positioned the jurisdiction as an International Financial Centre (‘IFC’) of choice and substance. In terms of the diversification index, the country has moved from a score of nearly 6.0 in the 1970s to 3.0 by 2010[1], and certainly lower now – which helps especially in today’s context of deep economic crisis. To further broaden the diversification of its value creation base, Mauritius’ hopes of scaling up its embryonic pharmaceutical industry will require foreign expertise and investments – hence presenting yet another attractive investment opportunity angle for investors considering the country.

Business cycles of recession and recovery are the consequence of shifts in aggregate demand and supply and as these occur, Governments usually adapt their fiscal policy response. Most of the developed world is adopting expansionary fiscal policies, for example, by lowering taxes to boost consumer spending. However, this is uncommon in African countries, which are characterised by smaller tax bases and whereby tax cuts only tend to benefit large corporates and the already wealthy[2]. Still, the introduction of new taxes to deal with a recession is against mainstream reasoned economic thinking as it has the capacity to cause more harm than good. Food security and self-sufficiency have both found important places on the economic and social priorities of most African countries within the continent. Bringing down trade barriers and restrictive practices – which should be very high on the agenda of the delayed but forthcoming African Continental Free Trade Agreement, will also help the continent in its food self-sufficiency endeavour. Governments in Africa also need to consider massive investment in capability-building sectors, i.e. education, education and education – which is much required to take the continent confidently into the future and will help in building new sectoral pillars, let alone bring enhanced economic diversification. In such a context, there will be no lack of investment opportunities for those who have the corresponding risk appetite and wallet, and the relevance of the Mauritius IFC is undeniable.

Extraordinary policies will be required to walk the tightrope towards recovery and these will shape economic and social prospects in the coming decade. Accommodative monetary policies and higher public debt are necessary and will be accepted as long as economic activity and inflation are depressed, and unemployment is high. However, debt-financed spending should be well targeted and in instances where this crisis has given us a chance to trigger the “reset” button, we ought to take this opportunity to include Corporate, Social and Governance (‘CSG’) considerations to investments to have a more robust and sustainable economy in the future. Also, while the African continent has improved in terms of diversifying its economy over the past years, much effort is still required in that spectrum. Likewise, the Mauritius IFC will also be called to diversify its offering on the financial playfield and occupy a more important role in facilitating the advancement of the continent.

All recovery plans and tools used will have to take into consideration the requirements of the “new normal” and its implications on our traditional and anachronic models. Hopefully, most stakeholders have acknowledged the challenges that we will be facing in the “new normal” and are adapting their responses accordingly. As Patton also said, “accept the challenges, so that you may feel the exhilaration of victory”.

[2] International Centre for Tax and Development: How can African tax collectors help cope with the economic impacts of COVID-19? (2020 [online]. Available at:https://www.ictd.ac/blog/africa-tax-cope-economic-impacts-covid-19-coronavirus/

Connect with our team of experts for more information on the Mauritius International Financial Centre and investing in Africa. 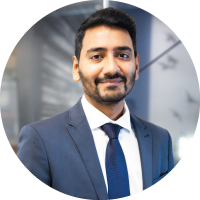 Mauritius, Above & Beyond A Travel Destination